Jimmy Kimmel Trolls The Public with the 'Yeezy Boost 2000' (Video) 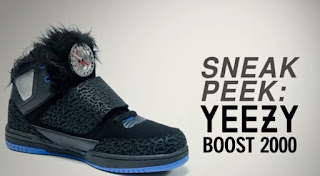 Kanye West released a new pair of his Yeezy shoes over the weekend. They cost $350 and go for as much as $1,200 on eBay. Jimmy decided to do something sneaky with the new Yeezys. He went and purchased some shoes for $12.50. Then we added a compass and glued on some fake fur. We then took that cheap pair of sneakers out onto Hollywood Boulevard where we told people they were the new Yeezys. These are very real opinions about very fakke Yeezy shoes.

Posted by ImAddictedToSneakers at 9:42 PM