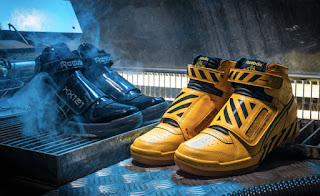 This Awesome Pack are Available at Noon HERE. Canton, MA – April 26, 2017 - 1986 was a momentous year in cinema history. Not only did kick-ass heroine Ellen Ripley return to the silver screen in James Cameron’s Aliens, it also marked the debut of Ripley’s signature footwear: the iconic ‘Alien Stomper’ boots made especially for her by Reebok. Answering the dreams of die-hard film fans and sneakerheads alike, Reebok will commemorate the moment by releasing a pair of highly collectible Alien Stompers this year. Drawing rich design details from the climactic duel between Ripley and the Xenomorph Queen, the ‘Final Battle’ pack is a nostalgic celebration of one of the most intense blockbuster finales in cinematic history.
The ‘Queen’ Alien Stomper was inspired by the gloss finish of the Xenomorph exoskeleton. A tribute to the deadly matriarchal villain, the shoes are assembled using high-sheen black patent leather and a toxic green glow that pulses beneath the translucent midsole as a nod to the Queen’s corrosive blood. To complete the ensemble, the Stomper’s signature forefoot strap is embroidered with 'XX121’, the code designation given to the extraterrestrial species. The ‘Powerloader’ Alien Stomper, inspired by Ripley’s battle-ready cargo suit, is an impressive work of art. Icy orange outsoles complement the striking ‘safety yellow’ leather upper, while red arrows reference the suit’s hydraulic movement. Debossed ‘PWL’ heel graphics and call-outs clarify the model’s identity, including the P-5000 serial number. As a nod to the canopy that protects Ripley during the final showdown, mesh panels overlay the Reebok logo, while quilting on the tongue and insoles evokes the industrial mechanoid’s upholstery. The unisex sized shoes will be packaged inside an ornate box that is also dripping with symbolism. Reebok designers immersed themselves in the film’s folklore, combing the Internet for obscure visual references and freeze-framing repeatedly to unlock minute details hidden in the loading dock where the final battle takes place. The Queen’s chamber (inner box) is decorated with an alien hive pattern, while the Powerloader bay (outer box) is modeled after the chamber that houses the suit. For the outer box, there is a green splatter that references the alien’s acid blood burning through the container as well as key design cues that take direct references to the outer lock door, and various hidden details that reference “Aliens” as well as Reebok mythography. The inner box, inspired by the Alien Hive, has a distinctive pattern that hides Xenomorphs, face huggers, and eggs, and also incorporates design details from the body of the ship, including the iconic floor grates, air outtakes, and hazard stripes from the Powerloader. The lavish cube is made by hand, using high-gauge cardboard which has been printed using multiple techniques and then debossed to add depth and texture. Tucked away safely inside, each shoe is stored in a separate drawer. The Reebok Alien Stomper ‘Final Battle’ pack will release for $325 in unisex sizing on July 18th, 2017, paying homage to the original film release date for the “Aliens” movie. To be the first to learn more about the Alien Stompers, please visit here.
Posted by ImAddictedToSneakers at 11:31 PM